Sakai was in an elevator with a strange girl with an eye patch covering her left eye and was holding a doll, it was already past midnight.

Mei: I’m going to visit my poor other half.

The next day, it was the start of classes for Sakai in Misaki High. He was a transfer student from Tokyo.

Sakai finds that there’s something weird in his class, Class- C.

Karl: Feel free to ask any of us. By the way, I’m Karl, the president of this class.

Yukari: I’m Yukari, this class’s secretary. If you need some tour around, feel free to approach me.

Inaba: I’m Inaba, class representative. If you want to know something, don’t hesitate to ask me.

Sakai: Thank you very much.

It was already dismissal when Sakai noticed that Mei is on the rooftop. Sakai then rushed up.

Sakai: A nice view in here.

Sakai: Why are you doing it here?

Mei: I hate being asked. It’s better if you stay away from me.

Sakai was new in town and he noticed a doll shop. He decided to go in.

Merchant: Feel free to look around, I have no other customers.

A doll caught the attention of Sakai

Mei: What brings you here? Are you fond of dolls too?

Mei: Dolls are somewhat creepy but I like these kinds of stuff. How about you?

Sakai: I don’t dislike them. Were you the model for this doll?

Sakai: Who’s the other half?

In Misaki High next day

Mei: You should really avoid being with me.

Mei: Because I don’t exist. And maybe you’re the only one who can see me.

Sakai: Wh-What did you just say?

Yukari rushes out of the room with a pointy umbrella in her right hand and she was scared when she saw Mei. She then rushed to the other side of the hallway and she fell down the stairs with her umbrella but suddenly it opened up and pierced through her throat.

A teacher got a phone call that said that Yukari’s mother died too.

Mei: It has already started.

Sakai: What? What is it that already started?

Mei: There will be a person that will die every month that’s connected to our class. It can be a student, a family member or maybe a friend.

Sakai: I-I don’t get it. What’s with this useless curse?

The following day, Inaba’s sister also died when an elevator in a hospital snapped then eventually fell.

Sakai then decided to go to the doll shop again and hopes that Mei is there.

Sakai: You too. You live here, right?

Sakai: I’m just here to look at the dolls.

Mei: You’ll not ask me some questions?

Sakai: You said that you hate to be asked.

Mei: I can make some exceptions for this day.

Sakai: What’s happening in our class? They’re not talking to me anymore.

Mei: So now you also don’t exist. Okay, I’ll start from the beginning. 10 years ago, there was a student named Rin Misaki. He was liked by all students and teachers because he excelled in sports and studies. But one day, he died in a plane crash and all were depressed. Until a student said that he’s alive and pointed to his desk. See? He’s there, he’s alive. Everyone believed in him and claimed that Rin is alive. The principal even allotted a seat for him during their graduation day. A year after that, there will be a person that will die every month that’s connected to our class. It can be a student, a family member or maybe a friend. The dead will come back and will slip into the class and the class will be short with one desk. The students devised a countermeasure to stop this phenomenon from happening by making a student non-existent to make room for the dead person.

Sakai: So, will two nonexistent persons make the countermeasure stronger?

Mei: Who knows? But it’s worth the sacrifice if it can stop this stupid curse. Do you want to see what’s under this patch?
Sakai was kind of nervous when Misaki started removing her patch
Mei: It’s a doll’s eye.
Sakai: It’s beautiful. Why are you hiding it?
Mei: It can see things that should not be seen so I hide it often.

The following day in Misaki High, Sakai and Mei saw a letter posted on the wall of their old school building. It said that “Bring the dead back to the dead.”

Sakai: I wonder what that means.

Mei: The dead person should be killed if we want to end this curse.

Sakai: H-how can we kill a classmate?

Sakai and Mei went back to their classroom and acted normally.

Sakai: Do you know who the dead person is?

Mei: I don’t know, I’m always wearing this patch so I can’t tell. They said that a dead person doesn’t know that he’s already dead.

Karl walked in front of the class

Karl: Tonight, we’ll have a camping near the old school building to commemorate our school’s humble beginnings.

Everyone agreed with the camping

Later that night, near the old school building

Sakai: You said that you’re the model of the doll in the doll shop. Who was the other half?

Mei: My twin sister, Misaki. She died before the start of classes.

Sakai: So she was the one whom you delivered a doll that day.

Mei: Yes, I promised to give it to her but that stupid curse killed her.

Sakai and Mei heard a loud noise. They then noticed that there was a large commotion going on.

Karl had stabbed another student with a knife

Karl: The dead shall be returned back to the dead. I will kill the dead person!

Everyone ran away from Karl but after that, the students started killing each other hoping that they might kill the dead person.

Sakai: I’ll protect you whatever happens.

Mei: The dead person is Karl. I can see the color of death in him.

Sakai stabbed Karl from the back

Days after that incident, only Sakai and Mei remembers Karl. Their normal lives continued and they ceased to exist once again. 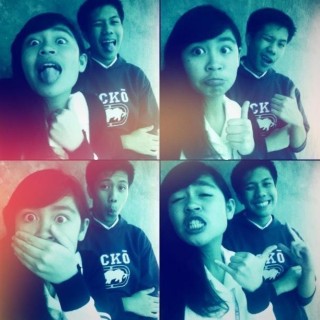